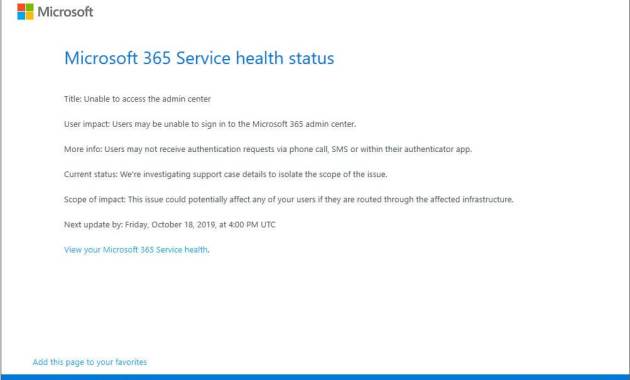 Office 365 Users Unable to Log On with Multi-Factor Authentication

At approximately 9:30 PM CDT on October 18, 2018, Office 365 Multi-Factor Authentication services went down preventing users with this vital security service from being able to sign on. Microsoft […] 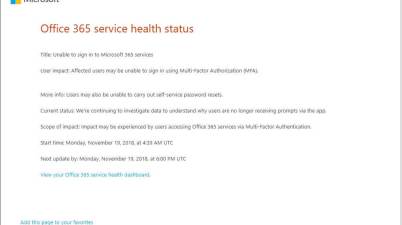 Office 365 Users Unable to Log On with Multi-Factor Authentication

At approximately 10:30 PM CDT on November 18, 2018, Office 365 Multi-Factor Authentication services went down preventing users with this vital security service from being able to sign on. Microsoft […]

Check Junk and Quarantine for Important Messages Many Office 365 customers have reported their staff receiving duplicate e-mail messages or missing messages that were incorrectly delivered to junk or quarantine. […]

Microsoft Users Are Getting Throttled On the heels of yesterday’s extended Office 365 outage, Microsoft applied a software update today that caused Office 365 users to get a “Throttled” message. […] 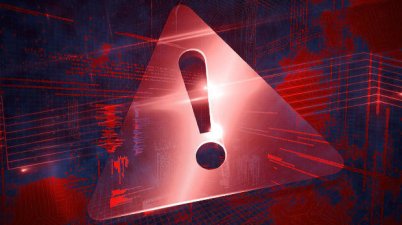 Office 365 Outage for September 4, 2018 At approximately 4a CDT, Office 365 online services went down due to severe weather causing power spikes that damaged cooling in the Microsoft […]

Microsoft Bookings Takes the Headache Out of Setting Appointments

Setting appointments with the provider of a service (and it can be any service – banker, doctor, CPA, etc.) is something we all do; it’s just part of life. But, […] 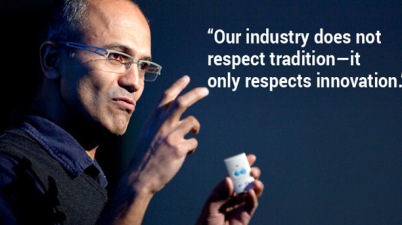 It’s Time to Familiarize Yourself With Microsoft Teams 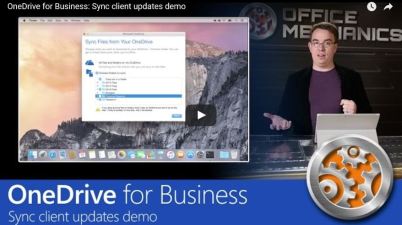 Based upon customer feedback, Microsoft is rolling out a Next Generation OneDrive for Business Sync Client for existing Office 365 customers. The update is designed for Office 2016 click-to-run and […]

Beginning in Q1 of 2016, we have converted approximately 1,000 Microsoft Online Services users from the depreciated Advisor model to Microsoft Cloud Solution Provider program. The process has been fairly smooth, but there […]

From our last Experience The Possible event, the office manager of a local medical office asked about securing e-mail for health, employee, and payment information. Many pundits state that “technically” it […]

Technology has forever changed the business world and how are you keeping up? That was the question for CPA’s posed and answered at the OSCPA 2015 Technology Conference in Norman, […] InnoTech Oklahoma 2015 Internet of Everything

When Innotech first came to Oklahoma in 2005, the Internet was just becoming useful. Google still used PageRank. Apple iPhone was two years away from being invented. Fast forward to […] 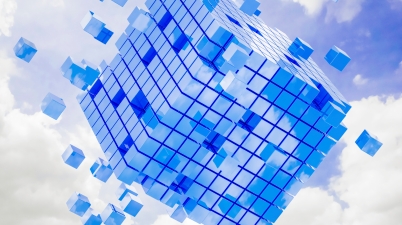 The heat index will average 108 degrees for the next several weeks. Another 3.4 earthquake will rumble across the state tomorrow. Rivers and lakes are at an all time high. […]

Office 365 offers unprecedented disaster recovery and security compliance, but you must enable features to replace traditional backup and take practical precautions.  Ignorance is not bliss. If you want to strike […]

Until relatively recently, you could not install Office 365 Pro Plus on a Remote Desktop Server (RDS). Product activation used an Office 365 e-mail address rather than a traditional Volume License […]